It’s February—month two of the new year—and we are ready to start walking the walk on some of those things we wrote about in our last post, starting with this month’s workshop theme.

We can sense your eye-rolls and sighs at the thought of more commercialized holiday business.  Didn’t we just finish with this? you say.  We hear you.  And yet, we also hear the little voice in your head saying one of two things:

“Goodness gracious, Valentine’s Day is just around the corner!  How on earth will I commemorate the celebration of love with my significant other this year!?”

“Ughhh…Valentine’s Day is here again.  How in the hell am I going to drown out the nauseating ringing of love that comes with this ridiculous holiday every year?  Also, I’m single.”

That sounds like you, right?  Close enough?  We thought so.  Which is why we have concocted a Valentine’s Day workshop that has something for everyone, the lovers and the haters.  Enter our Very Victorian Valentine’s Day wine painting dinner!  Let us explain.

First, the obvious.  We are celebrating with workshops on the 13th and 15th of February.  Lovers and haters alike should appreciate that we are trying to alleviate the stress of getting a reservation anywhere on the notorious 14th , or of having to bear witness to the annual ritual of excessive public demonstrations of affection.  Ease up, don’t fight to get a table at some supposedly snazzy restaurant with the lovebirds who’ve bought into the con.  You’re a rebel: you’ll celebrate Saint Valentine whenever you damn well please.  But preferably with us on Monday or Wednesday (wink wink, nudge nudge).

Victorian word association games don’t tend to start with things like rebellion.  More likely we think refinement, propriety, and conservatism under the great queen’s rule, but in its own way the Victorian Era ushered in a fair amount of contrarianism.  And we are taking full advantage in order to put a refreshing twist on your homemade valentines this year.

Spanning the bulk of the 19th Century, this epoch in European history saw the ebb and flow of different romantic conceptions, as effused in art, literature, invention, and society itself.  There is a great deal of culture packed into this historical age that we could chew on, but perhaps the most pronounced is the dichotomy between the rise of Romanticism at the start of the century, and the subsequent wave Realism in the latter part of the century.  It is this duality within the era that makes the time period an exciting study for the lovers and the haters at our table, and serves as brilliant inspiration for our wine art.

When we speak of the Romantics and the Realists (note, with capital “Rs”), we are not speaking of sentimental saps and cynical grumps, but of the followers of two different artistic philosophies, which in themselves reflect the general trends of the time period.  No cultural movement exists in a vacuum—it arises as a response to what came before and what looms ahead. In this way, the Romantic movement came as a reaction to the foreshadowed rise of industrialization and scientific experimentation from a subset of artists.  These folks were having none of it and demonstrated their aversion with ideas and artwork that contrasted with the perceived industrialist values: emotion over rationalization, natural beauty over synthetic, spontaneity over orchestration, and subjectivity over objectivity. They were not interested in conforming to a prescribed universal standard or in portraying things exactly as they were, but rather as they felt they were, or could be. This philosophy permeated into everything, including ideas about lowercase-r romantic love.  Look no further than the Romantic literature of the time for the clues, and note that it was not all warm and fuzzy feelings for these writers.  Sure you had Jane Austen’s happy endings (which we should remember only came after some fair critique of societal structures like classism, slavery, and others that threatened individual prosperity)—but this era also ushered in romantic literature that was decidedly dark.  This was the time of the Gothic writers and poets: Edgar Allan Poe, Mary Shelley, the Brontë sisters, and Nathaniel Hawthorne, among others.  The emos of their time, they concocted spectacularly bittersweet romances filled with secrets, pain, and, dare we say, even a bit of evil?

It doesn’t exactly conjure daydreams of butterflies and rainbows does it?  Good—that’s why you won’t find them on our valentines.  That’s for you haters out there.  After all, what would the rewards of love be without the pain of loss and longing to raise the stakes?  So expect to be inspired by the dark side of love in the workshop.  You can thank us later.

Other aspects of this Romantic period in the Victorian Era that serve as sources of inspiration include the ornate, eastern-inspired floral textile designs of William Morris, the prevalence of the peacock in graphic design, and the flourishes that came to characterize fonts, design, and signets of time. 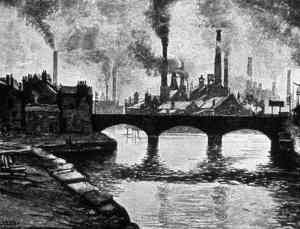 On the other end of the spectrum, though, we have the Realists.  By mid-century, this group of artists were fed up with the Romantic drama queens; they wanted to come back down to earth.  This they did by choosing to portray the ordinary, everyday scenes, people, and objects around them as they actually existed.  As part of their interest in real life, these artists embraced industrialization and technology—the things transforming the world as they saw it.  No need to tell grandiose, fantastical stories of people with extraordinary circumstances—there was enough interest for them in the stories of real-life working people with terribly ordinary circumstances.

And this perspective was equally philosophical.  It prized the ability to seek truth in observation, as opposed to intuition or feeling.  Enter: science.  It’s not hard to imagine who the Realists in our society today would be: the technocrats in Silicon Valley who believe their technology, in its ability to mine information we never had access to prior, will bring us truth, set us free.  The Romantics are rolling in their graves. Nevertheless, the Realist appreciation for the fruits of modern labor is aligned with some iconic images of the Victorian Era that set our imagination alight with ideas about invention, construction, and exploration.  Think Jule’s Verne’s 10,000 Leagues Under the Sea, the revolutionizing advent of steam power, and the publication of volumes containing scientifically accurate illustrations of flora and fauna, as in Köhler’s Medizinal-Pflanzen (above).  The work of game changing scientists like Charles Darwin was being unleashed and new developments in science and technology seemed to be occurring more and more frequently.  No greater demonstration of this new reality could be found than London’s 1851 Great Exhibition (below), which tantalized the imagination with modern inventions for every want and need. In this way, we are inspired by a different kind of love—a love of truth, invention, and discovery.  So look for translations of this in the workshop as well.

And that is just barely scratching the surface of Victorian industry, culture, and society.  There is the rise of the Japanese-inspired design called Japonism, the art nouveau artistic styling, the translation of these styles into commercial design for marketing and advertisements, the countless scientific and industrial developments, and not to mention the manifold foreign influences resulting from English imperialism which permeated all aspects of culture.  We could spend months feeding off of the Victorians for artistic inspiration! But alas, we only have February and it will have to do for us, the lovers and haters that we are.  So here’s to a different sort of Valentine’s Day: one that reminds us that romance is faceted, not all of its sides shining as brightly as others, and not all of them reflecting the sort of love love that we default to on this holiday.  And that is what renders it so precious, and so exciting!